A Twitter friend said a few days ago he wanted to write a book. “Any direction?” he said. My first impulse was to say “Forward and up!” but then I thought this person wasn’t a professional writer. He had an idea but he had never written a book before. How do you do something you’ve never done before? So I told him I’ll blog about it, try to explain to myself how someone writes a book and hopefully help with my friend’s book.

Of course, in this case this someone would be me, which makes it all very subjective because I’m sure different people approach the things they love to do differently. I, for example, love to bake but cannot knead. I have tried it in the past and I just can’t seem to be able to make all the ingredients blend well without — this is the important part — a solid portion of the dough remaining on the counter in the form of heavy, ugly flakes. But I have a friend who kneads like a pro. I use my kitchen robot. We both love baking but we approach it differently. It’s kind of the same with books, I suppose, though there are some universally helpful tips I’ve included below.

The journey of writing a book, for me at least, always starts with a destination. It’s rarely the final destination but it is a point I want to get to and this point usually takes the form of “So, this person popped up in my mind and s/he did something weird and I want to know where it will take them.” This initial destination is the idea, however vague it may be at first. It will become clearer along the way.

Once I have a character and an idea — I tend to come up with characters first but other people first have the idea and the characters make an appearance later — I begin making notes. I tried the plunge-right-into-it approach with the first draft of The Lamiastriga and, well, I believe it was a big reason why I ended up with four drafts before I had something reasonably fit for a publisher.

Writing without any kind of plan could be fun. It’s like taking a walk in a beautiful place. The thing is, I found that without any kind of idea about where I want to get to, the walk tends to become uncomfortably long and, what’s worse, I tend to get lost, so I have to go back and try new routes. Basically, writing without a plan for me is like playing a videogame. I don’t play videogames for one very simple reason: I have no patience with dying a hundred times and doing the same thing again and again until I get it — guess it — right.

So I plan, however roughly. Which means I start making notes. Pretty general at first, or even the first sentence or two of the book if they happen to be so kind to report for duty at this very early stage. Since I recently started a new book, here’s how the first day of note-taking looked, right after I decided to write a book about a plane.

As you can see from the above notes, what you read helps at this stage. To me, it doesn’t help at the writing stage because if I read while I write I get easily contaminated by the other author’s style but during note-taking it’s a huge help. After all, we do strive for some kind of originality so it’s good to know what has been done, especially what has been done brilliantly.

This note-taking stage overlaps with the actual writing more often than not. When I was doing the fourth draft of The Lamiastriga, I first sketched the scenes by hand in a notebook and then expanded them in the manuscript. It helped me stay on course and write more regularly. 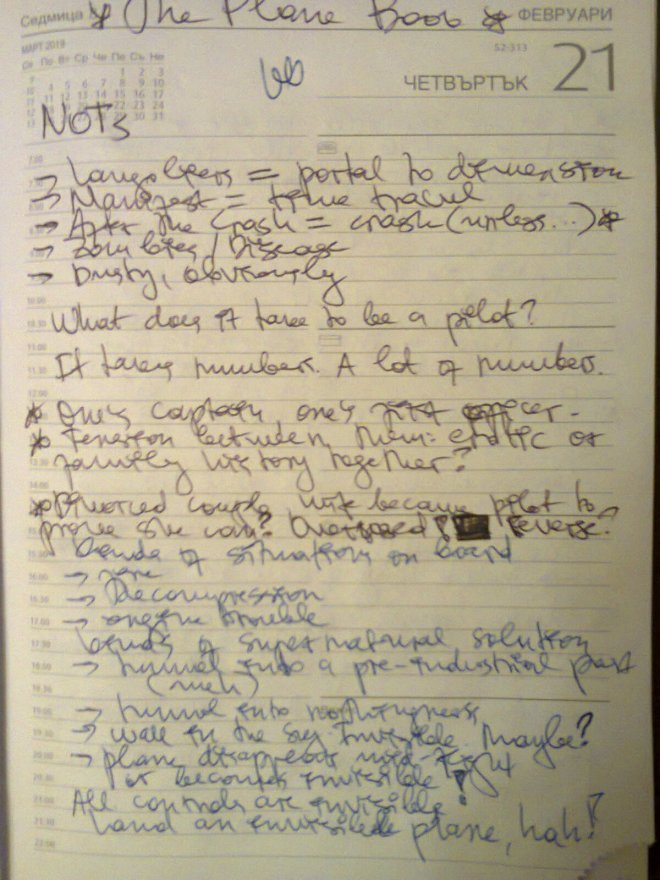 So, this is how what I still call The Plane Book looked a couple of days later when I forced my brain to do some actual work. Now, this is not my typical note-taking process. The typical note-taking process basically comes down to a summary of a chapter that I later expand. But this time it was different because I first had an idea that I had to put some life into and then I had to come up with characters.

This is usually the easy part for me, the characters. I love developing characters. It’s like profiling. The story was a bit tough, though. I played around with possibilities for a whole week before the winner hit me and I jumpstarted that vague idea into a story. Once I had the story I could move on to the plot. (Quick reminder: story = what happens; plot = how it happens.)

Now came the even tougher part, the one that requires research. I’ve been reading a lot about planes and commercial airline operation over the last couple of weeks but this will not be enough and I will have to find a pilot to consult with eventually. For now, the questions you see above have temporary answers, which will be checked for plausibility when I reach draft 2. Plausibility matters and you can’t have plausibility without research. That’s all there is to it. Also, research is fun.

Around this time in the note-taking stage I start writing, which means I create a new Word document and start typing, expanding on my handwritten notes. Usually, this part — the early writing — is easy. Again, it’s not a hard and fast rule. With The Plane Book, I quickly found out two surprising things: first, I got much more easily distracted than usual, itching to hang out on Twitter every ten minutes and second, writing was hard because I was paying a lot of attention to all the important rules of writing, including adverbs, verbs of internal processes and the biggest sin, telling instead of showing. In short, I had a problem.

The solution to the problem, luckily, was simple: forget the rules, just write the damn story and then go on an adverb-killing spree and verb-induced self-flagellation tour in the second draft. It worked like a charm, I’m pleased to say. In fact, it worked so well I decided to drop the manuscript for a few days to write a funny story bending the rules. This sort of decision is a good example of my problems with discipline. However, you need discipline to write. Sorry, I don’t like it either but I try.

Discipline in my case means summoning the willpower to not go into Twitter before I’m done with a scene however strong the itch. The fact that writing is what I start my day with helps. I write very early in the morning before my workday starts, because there are no other distractions but the online ones at that time. Minimizing the distractions is probably the most important element in the writing process that does not involve actual writing or thinking about writing and it would be one piece of specific advice I would give to that friend who wants to write a book.

Kill the media, hide your phone, put on some music if that helps or stop the music if it doesn’t, and… Begin! Getting rid of distractions is a form of discipline, by the way, so praise yourself. Then set yourself a deadline. Deadlines are essential for writing discipline and I don’t mean deadlines of a month to finish the first draft or something, though you can, of course, set yourself all the deadlines you want. No, what I mean here is the time on a single day that you will spend writing.

Here’s when the timer comes in. I’ve seen a lot of blog posts from writers who swear by their timer and I recently read Amy Alkon’s Unf*ckology, where I discovered she, too, writes with a timer. I thought it was time to give it a go, especially since The Plane Book was going more slowly than usual and I could use all the help I could find to get rid of distractions.

I’m happy to report the timer works. When you know you have a set period of time — I went for 50 minutes — it somehow becomes easier to focus on the work at hand. I find it motivating, too. I have fifty minutes and then it’s over. I need to fill these fifty minutes with words otherwise I will never finish the book and my life will be stripped of all meaning because I’m good for nothing, even writing for fifty bloody minutes. I  know my self-motivational approach leaves a lot to be desired by more positive people but it works for me. Everyone’s free to motivate themselves in any way they see fit.

That seems to be about it, really. Wait for an idea or find a topic that interests you and come up with an idea, do some planning, do some (which means as much as possible) research, write, and don’t worry about doing all three together.

In other words, if you want to write a book, you need an idea, a character or two — or half a dozen as I, apparently, have in The Plane Book — a story, a plot, a notebook/file for notes, no distractions, and a timer. I use the one Google spit out for me when I typed “timer” in the search box. Then you just sit down and start putting one word after another. One day you wake up amazed that you have produced 80,000+ words that tell a story. Congratulations, you have written a book.

(Here I had an urge to go on and ruin the good news with a mention of what comes next but I won’t do that because this is supposed to be an inspirational, motivational, and any other thing that ends in -ational and makes people feel better about themselves post. Writing a books is simple. It’s just not easy but where’s the fun in easy, right?)